Capacitive touch screens are made by plating one or more layers of conductive materials (such as indium tin oxide ITO) on the substrate, and then sealing and bonding with the protective cover to protect the electrodes. When other conductive objects, such as bare fingers or conductive pens, touch its surface, an electronic circuit is formed there. Capacitive touch sensors are embedded in the glass to detect the position where current can be formed, thus completing a touch operating.

This way of working is completely different from the resistance TP relying on physical clicking. 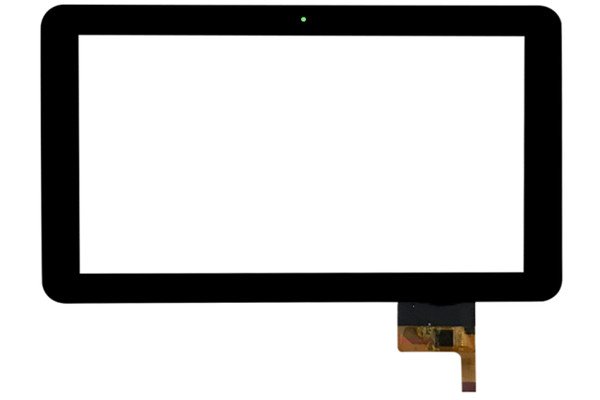 ◆ Respond to very light touch, and does not need to sense actual physical pressure

◆ Because there is only one layer of glass, the product has a high transmittance

◆ Moisture, dust, and oil will not affect the touch effect

◆ Does not support multi-touch

◆ Maybe interfered with by noise

Compared with the surface capacitive type, the projected capacitive touch screen is usually used on smaller screen size. The internal structure includes a circuit board integrated with an IC chip for data processing and has many transparent electrode layers with specified patterns, and the surface is covered with a layer insulated glass or plastic cover.

When a finger approaches the surface of the touch screen, the electrostatic capacitance changes simultaneously among multiple electrodes. By measuring the ratio between these currents, the contact position can be accurately determined.

Projected capacitive technology has two sensing methods: grid type and line sensing type. The human body can conduct electricity because it contains a lot of water. When the finger is close to the pattern of the X and Y electrodes, a coupling capacitor will be generated between the finger and the electrode.

◆ Longer life, because there are no moving parts during operation

◆ The sensitivity can be adjusted. If the sensitivity is adjusted very high, the touch screen can even be operated without touching or using the plastic cover. The cover plate can also provide additional protection and various flexible structural designs

◆ If the sensitivity is increased, it can also support the operation with gloves

◆ Respond to very light touch, and does not need to sense actual physical pressure

◆ The touch screen is generally designed with the control IC

◆ Due to its detection method, capacitive touch screens are susceptible to electrical noise interference, especially the interference from LCDs.

◆ Need precise matching pattern, so the production cost is higher

In any case, the controller of the self-contained touch screen cannot measure the coordinates of each intersection, it can only measure which row or column it is.

When there is only one finger touch, the touch screen will work normally. For example, as shown in the figure below, the single-point touch position X2, Y0 can be accurately sensed by detecting all X electrodes and Y electrodes in turn. Measuring a single electrode instead of a cross point is the main drawback of a double-layer self-capacitive touch screen-it cannot clearly detect multiple touches.

The touch of the two points X2, Y0, and X1, Y3 actually produced four-point coordinates. No matter what, the two-finger gesture operation defect cannot be completely solved when using the self-contained touch screen. The secret is in the software-I would rather use an ambiguous reporting method so that the software can identify the direction of the reporting point.

In this case, it doesn’t matter whether the two-point touch generates four-point coordinates, as long as it can accurately recognize that the two points are a gesture of moving away from each other or moving toward each other.

Mutual capacitance is currently the most widely used type, allowing unlimited touchpoints, supporting the higher resolution, insensitive to EMI interference, and more efficient use of sensor space. Mutual capacitance takes advantage of the feature that most conductive objects can hold a charge when they are very close.

In a mutual-capacitive capacitive touch screen, transparent conductors are made into specific patterns on two layers of electrodes separated in space, usually as rows and columns. Since the intersection of each row and column generates a unique set of touch coordinates, the controller measures each intersection separately, as shown in the figure below.

This is the main advantage of the mutual-capacitive capacitive touch screen-it can detect every electrode on the screen Touch sensing at the intersection.

Whether it is self-capacitive or mutual-capacitive, it depends on the charge transfer between the body capacitance and another single-layer or double-layer electrode, so this method of capacitive sensing is usually called “charge transfer”.

Optical bonding is an assembly method that laminates the touch screen (or other rigid materials) to the surface of the LCD display screen. A special adhesive is usually used to bond this form of optical glue between the display screen and the touch screen. Curing to form a tightly-fitting and stable connection without air.

Compared with traditional frame glue bonding, optical bonding has many advantages, the most important of which is to enhance the optical characteristics and increase the structural strength.

◆ Under brighter ambient light, higher brightness can be obtained with less energy consumption

Please contact us for more details about the touch panel solutions, or visit one of our websites as  HIFIVEE for our creative and innovative products.